What vintage is your pillar box?

The first roadside letter boxes in the UK appeared in 1852 and since then there has been a wide variety of styles and sizes. Improvements and finessing of the design have continued up until the present day. There are more than 115,500 pillar, lamp and wall boxes in the UK, including around 800 different types produced by 20 or so foundries commissioned to make letter boxes over the last 150 years. Understandably they are an important part of our heritage. 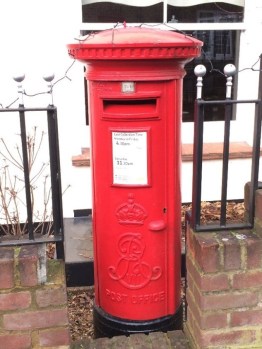 The oldest surviving box in the town is in Gravel Path, a well-preserved pillar box outside the old sub Post Office which now a residential property aptly named “The Old Post Office”. It is an Edward VII pillar box, the Royal insignia has a more ornate or curlier script (1904-10), in contrast to older boxes from that reign when the script was less ornate and described as “open”. This corresponds well to the age of the properties in the vicinity which are predominantly Victorian or Edwardian. In fact, there are studs on the top which suggest there may have been an oval direction sign pointing towards the Post Office.