Edward Popple was born on 22nd April 1879 in Provident Place (now Waterside) at the bottom of Holliday Street. His parents John and Elizabeth came from Lincolnshire and Clerkenwell, but they married in Berkhamsted in 1877. Edward was educated at Victoria Boys’ School, from whence he progressed to Berkhamsted School. On finishing his education, he returned to Victoria Boys’ School, where he remained for 48 years, first as an assistant teacher, and finally as its Headmaster. 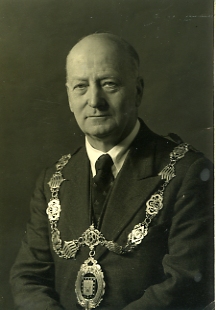 In 1917, a tribunal was held for Popple to be exempted from military service, as Victoria School was one of the largest in the neighbourhood and “it was a matter of extreme national importance that the boys of the future should receive good training”, according to the Headmaster of Berkhamsted School, Mr Charles Henry Greene (Gazette, 4th March 1917). The Rector paid tribute at Popple’s retirement ceremony in 1947: “he had opened youthful minds and equipped the boys to seek and obtain knowledge, to use the abilities God had given them to make sure of knowing what was worthwhile. This was real education.” (Berkhamsted St Peter’s Parochial Review, June 1947). In Popple’s reply, he spoke happily of his long association with the school and of pleasant memories. His boys had gone out all over the world, taking with them something of the character and ‘esprit’ of Victoria School. One of his former pupils, Leslie Mitchell, recalled how his old Headmaster helped to prevent the spread of diphtheria in It was but yesterday… Popple was a man of great versatility: artist, musician, conductor, naturalist, horticulturalist, with an interest in the history of the town (he was a founder member and Chairman of the Berkhamsted Local History Society) and a love for the countryside around Berkhamsted. He was a man of many parts and a friend to many!