As the train slows on its approach from Bourne End to Berkhamsted, the name Dwight’s Lane still lingers in the memory of older residents and the honk, honk of pheasants can still be heard in the gardens of Ivy House Lane, to evoke memories of earlier times. When we consider the position of the various houses in which the Dwights lived we can see how extensive was their domain and their influence in this part of the town. They occupied land, some owned and some leased from Earl Brownlow, which stretched almost to Bourne End and Potten End in one direction, beyond Well Farm and over to Castle Hill Farm. The land was required to breed their pheasants or to provide grain to feed them. 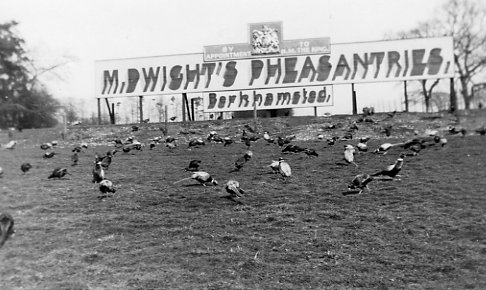 Every year 20,000 young pheasants were raised at Berkhamsted and, in order to maintain a strain of strong and vigorous birds, a complete change of pure breeds was introduced into the stock every breeding season. In 1938, Dwight’s Pheasantries advertised, with great pride, that they had supplied Squire Osbaldeston, a great sportsman and valued customer. Also in the archives are several invoices to Baron de Rothschild at Mentmore in the 1850s. Reports indicate that the firm continued to flourish until the 1960s, but at last was sold as a going concern to a Buckinghamshire firm. The last Dwights to live at the Pheasantries moved to a small farm they had bought the other side of Aylesbury, their two girls riding over on horseback! Dwight’s Pheasantries was no more.