Beating of the bounds

When Birtchnell’s gentlemen’s outfitters closed down, the Society was grateful to receive from Bob Clark a number of items from Percy Birtchnell’s local history collection. Les Mitchell identified the locations shown in an extensive collection of small and large photographs. Also included were books and documents, clothes and artefacts.

One set of pictures was mounted on a display board, entitled ‘The Beating of the Bounds of Great Berkhamsted Rural, July 15 & 17, 1903′. 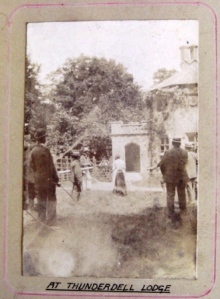 Beating the bounds at
Thunderdell Lodge

Beating the Bounds, remembered by Sydney Chappell…
“I believe the last occasion on which the bounds of the Parish were beaten was during my time as a Bourne scholar, in 1905 or thereabouts. On the second day of the event, the boy scholars were invited to be present. So we twenty boys with about the same number of local dignitaries assembled in Shooters Way at the top of Gallows Lane. We were all issued with a six foot osier wand with which to do the beating. Also a bunch of narrow ribbons, light blue, yellow and black, the colours of Berkhamsted, to pin to our caps. I still have my bunch of ribbons but they are now very bedraggled.

We started off down the lane to the bottom and turned left across the fields to Soldiers Bottom. Then through the Hockeridge Woods on to the Chesham Road. After a short rest for refreshments (ginger beer for the boys, something a bit stronger for the men) and pork pies, we crossed onto Haresfoot Park and up to the Haresfoot house.

Anyone accosted on the route was forced to run the gauntlet, which meant running through a double row of the assembly, who used their wands to hurry him or her on. At Haresfoot Park the elderly Lady Smith-Dorrien, graciously came out on to the lawn and walked between the double row with wands forming an arch.

The house was apparently built right on the boundary so one of the company had to walk through it as near as possible over the boundary.

From then on we continued through the park to Brickhill Green, where after disposing of the remainder of the refreshments, we dismissed.”
(Berkhamsted Review, Nov 1990).